Welcome to the Kobayashi-san Chi no Maid Dragon Wiki! 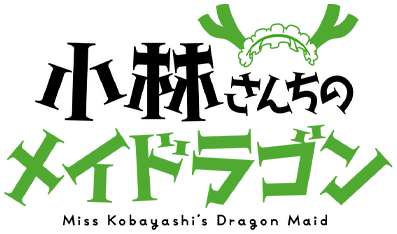 The wiki about the series Kobayashi-san Chi no Maid Dragon that anyone can edit.

There are currently 380 articles since the opening of this wiki, but there's always room for more! You can help us expand!

As office worker Kobayashi gets ready for work, she is greeted by a large dragon right outside her front door. The dragon immediately transforms into a human girl in a maid outfit, and introduces herself as Tohru. It turns out that during a drunken excursion into the mountains the night before, Kobayashi had encountered the dragon, who claims to have come from another world. Subsequently, Kobayashi had removed a holy sword from Tohru's back, earning her gratitude. With Tohru having no place to stay, Kobayashi offers to let the dragon stay at her home and become her personal maid, to which she agrees. As Kobayashi has forgotten her drunken offering, she is initially reluctant to allow the dragon into her home despite her previous promise, but a mix of guilt and the usefulness of Tohru's dragon abilities convinces Kobayashi to accept her. Despite being efficient at housework, Tohru's unorthodox methods of housekeeping often end up scaring Kobayashi and bringing more trouble than help. Additionally, Tohru's presence attracts other dragons, gods, and mythical beings to her new home.

This feature is not currently available on wikis which use the new Unified Community Platform (UCP). However I do not want to remove this and possibly lose all the current votes. This message will be removed once the feature is returned ~Bdun4

You are required by law to be 13 or older when making an account on Wikia. This is passed under the COPPA policy. If you are under 13, you will be blocked. If you are 13 or over, we strongly encourage you to make an account.

I am curious about the Dragon World and its landscapes. I would look into the manga, but I figured it would be easier if I just asked the fandom comm…

The Other World's Environment

What I think will happen in Season 2

The anime was announced in manga volume 4, released in May 2016. It aired during the Winter 2017 season between January and April that year…

When you're browsing a page on this wikia you might have noticed there is now a discord application showing various users being online. This is the d…

This wiki is a plethora of spoilers for the anime and everything related.

Want to affiliate with us?
If you would like to become an affiliated site, please contact an administrator. 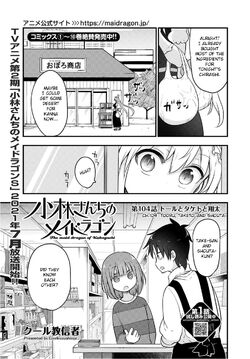 Tohru wonders how Taketo and Shouta know each other. 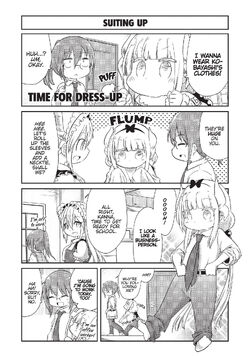 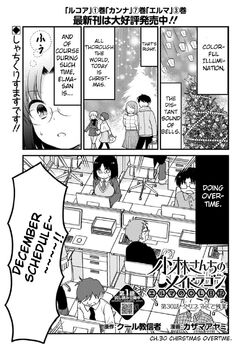 Elma and Lucoa eat at a Kaiseki.
Chapter 23 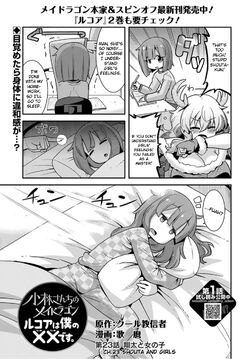 Lucoa casts a spell that changes Shouta into a girl. 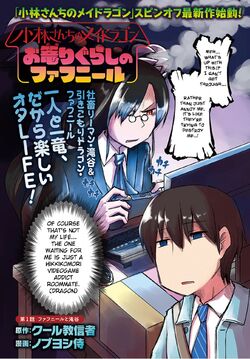 Takiya describes his roomate Fafnir and plays games with him.

If you see this, your JavaScript might be disabled or DiscordIntegrator plugin isn't working. If the latter, please contact a wiki administrator. 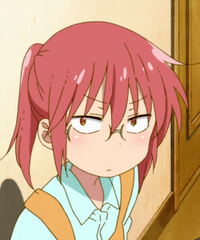 Kobayashi (小林 Kobayashi) is the main protagonist of Kobayashi-san Chi no Maid Dragon. She works as a computer programmer in Jigokumeguri System Engineering Inc.
Read More 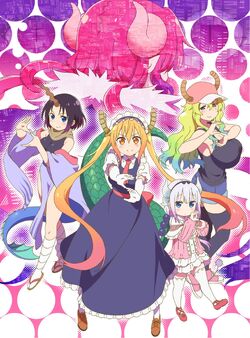 Have information on a subject relating to Maid Dragon that we don't have? Go ahead and make a page on it, but ensure it is in line with our Rules and Guidelines!
Type in the title first before clicking the button!

Not sure what to do? Go to our to-do list to find an article that needs improvement.
Retrieved from "https://maid-dragon.fandom.com/wiki/Kobayashi-san_Chi_no_Maid_Dragon_Wiki?oldid=10295"
Community content is available under CC-BY-SA unless otherwise noted.